There will be some adjustments to the battlegrounds with the upcoming update “Horns of the Reach”. On the official Elder Scrolls Online site the developers have now given a small insight.

So there will also be a new game mode, Chaosball. This battleground game mode is part of the regular “Grab Bag” queue.

As part of the release of Update 15 and the DLC player expansion “Horns of the Reach” in August, we want to please the battleground players with a free new game mode and new map! You would like to know more about what awaits you in “ESO: Morrowind” 4v4v4 PvP Arena? Read our preview!

If Update 15 and the DLC player expansion “Horns of the Reach” are coming, you will be able to play a new battleground game mode as part of the regular “Grab Bag” queue: Chaosball.

In Chaosball the goal is simple: capture and hold onto the “ball” for as long as possible to earn points for your team. The squad, which has the first 500 or most points when the time has expired, wins.

Of course there is a catch, because it is not as simple as it is to hold the ball. While the other squads will try to snap it away from you, the ball itself will result in an impairment that affects healing and shields, resulting in unavoidable damage to yourself and squad members in your environment, which will also increase with time. That’s what we call the hot potato!

While you are carrying the ball, you can use the skills of your character to defend and stay alive, but you can neither drop the ball nor pass it on to another player. This means that the one who carries the ball has it on lifetime – how short or long it may ultimately turn out to be! As a result, your squad is challenged to revive the battlegrounds with new and unique strategies so that there is a stronger focus on traditional PvE roles such as defenders and healers.

Even for Battlegrounds conditions, Chaosball games are particularly fast and, well… chaotic, which makes it a perfect addition to the current rotation of the game modes. 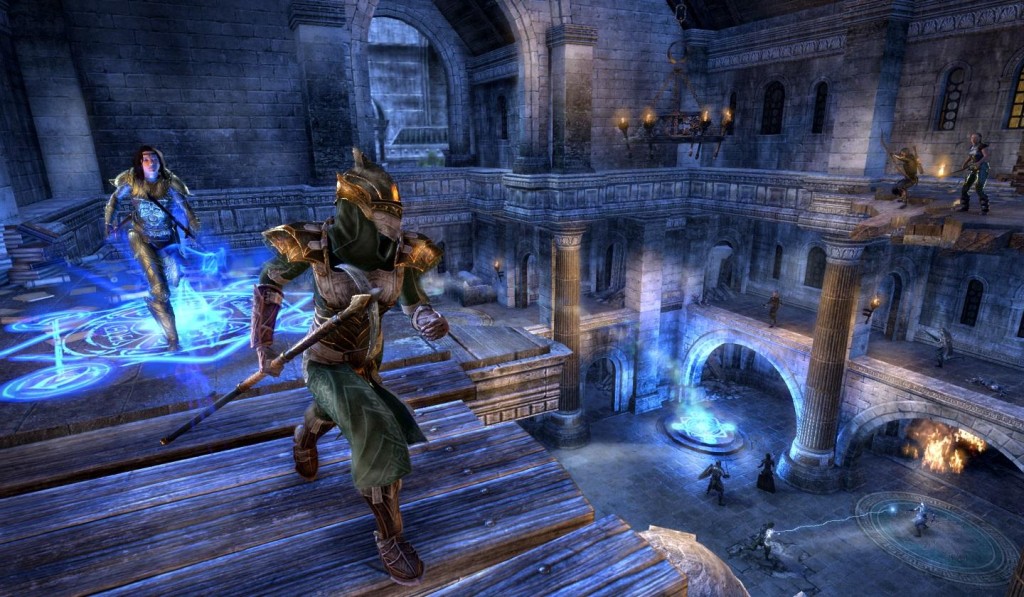 The other great addition to the battlegrounds included in Update 15 is an exciting map, which we also packed into the “Grab Bag” queue: Arcane University.

This new arena takes place in the crumbling ruins of Cyrodiil, once a great educational institution, which was affected a long time ago by the break of the Soulburst and the Daedric occupation. The university, which stands in the shadow of the White-Gold Tower, is a challenging Battlegrounds location for both warrior academics and learned heroes.

The Arcane University is a little larger than the three original Battlegrounds maps, and with it, dangerous house battle by decaying buildings and other impairments of the line of sight. Then there is the vertical element.

If you are inside the university, you will reach steps to the center of the building and use a series of portals (similar to those in Ularra) to teleport to the upper level. This allows you to attack the enemy squads below and quickly get from one side of the card to the other. If you are clever, you will also find points of view where you can use skills such as Sorcerer’s Bolt Escape to quickly travel from one side to the other, helping you elude enemy pursuit.

But be careful, because these useful portals also have side effects: they can turn you into a ticking time bomb!

Most of the time, the portals glow blue, but in random intervals, they appear red. Instead, you will be red in red. If you use a red portal, you will get the “Mark of the Worm” that explodes your character after a short period of time. This damage will help you and your squad members, but will also hurt enemies nearby, which can be both a risk and an opportunity.

Are you overwhelmed by enemy adversaries? Bring the ultimate victim by grabbing the character and becoming a human bomb! Does a squad member return to the flag or protect the ball? Get the sign and keep away with him pursuers. Or even better: Why do not you linger and use the Alliance War Proximity Detonation to make even more bangs?

Whatever game mode it is, the portals make every Battlegrounds match explosive at the Arcane University.

We are looking forward to the expansion of ESO: Morrowind through the battlegrounds with Update 15 in August and can hardly wait to discover what strategies your squad is trying to win the victory in this new arena and the new game mode. Note that you do not need the DLC player “Horns of the Reach” to join these new PvP additions. However, you must have ESO: Morrowind to play battlegrounds. Are you working through the unstable ruins of the Arcane University and fighting to control the chaos?

There have been a lot of changes and updates in The Elder Scrolls Online in the past few months since it was released. Stay tuned to ESO-GOLD for more guides on ESO and more.