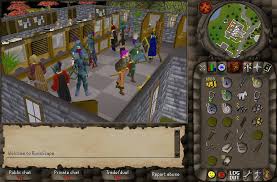 Begin to hunt dragons when your combat level gets above 79. In “RuneScape,” dragons can be found in the Wilderness, the Taverley Dungeon, the Heroes’ Guild and the King Black Dragon Dungeon. Collect the dragon hides and take them to the tanner in Al Kharid. Use a needle and thread on the dragon leather to make dragon armor.

Mine some clay in the mine southwest of Varrock. Get a bucket from the general store and fill it with water. Use the water with the clay to make soft, workable clay. Walk north to Varrock, then walk west to Barbarian Village. Use the clay with the pottery wheel in the house in the southeastern part of Barbarian Village to make a pot, then use the pot with the kiln to fire it. These pots aren’t worth much money, but they’re useful for holding milled grain, so keep them in your “RuneScape” bank account. As you advance in crafting skill, make items that are worth more money, such as pie dishes, bowls and plant pots. Sell these for runescape gold at the Grand Exchange in northern Varrock. To make even more money in “RuneScape,” sell your pie dishes and bowls unfired.

Go to the cow pen in the northeastern part of Lumbridge, to the east of the river. Kill cows and collect their hides. Take the hides with some runescape gold to the tanner in Al Kharid and have him tan them as soft leather. Buy a needle and several spools of thread from the crafting shopkeeper in eastern Al Kharid. Use the needle on the tanned hides to make gloves. As you reach higher crafting skill levels, make boots, cowls, vambraces and leather body armor. However, the tanned hides are worth more money in “RuneScape” than the crafted items, so only craft as many items as necessary to increase your crafting level. When you achieve level 38 crafting, begin to make leather coifs, which are worth about 100 gold pieces each. Sell them at the Grand Exchange.